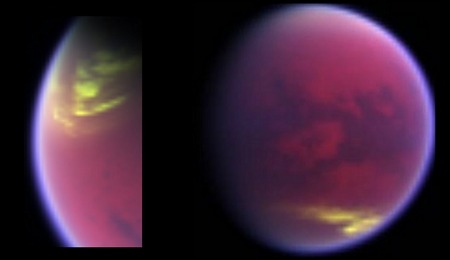 Cassini's first observations of clouds near this latitude occurred during summer in the southern hemisphere. Equinox, when the sun shone directly over the equator, occurred in August 2009. It brought a changing of the seasons, as Titan moved out of southern summer into northern spring.

For the past six years, Cassini has observed clouds clustered in three distinct latitude regions of Titan: large clouds at the north pole, patchy cloud at the south pole and a narrow belt around 40 degrees south. Now scientists are seeing evidence of seasonal circulation turnover at Titan. Clouds at the south pole disappeared just before equinox and the clouds in the north are thinning out. This activity agrees with models that predict cloud activity reversing from one hemisphere to another.

During winter in the northern hemisphere, northern polar clouds of ethane formed in Titan's troposphere, the lowest part of the atmosphere, from a constant influx of ethane and aerosols from a higher part of the atmosphere known as the stratosphere. In the southern hemisphere, atmospheric gases enriched with methane welled up from the surface to produce mid- and high-latitude clouds.

The data for the images was detected by Cassini's visual and infrared mapping spectrometer in near-infrared wavelengths. Scientists focused on three wavelengths of infrared radiation that were particularly good for observing cloud signatures and assigned them red, green and blue channels. Emissions in the 2 micron wavelength of light, colored red, detect the Titan surface. Emissions in the 2.11 micron wavelength, colored green, detect the lowest part of the Titan atmosphere, or troposphere. Emissions at the 2.21 micron wavelength, colored blue, detect the hazy stratosphere, a higher part of the atmosphere. The clouds appear yellowish because they lit up the channels designated red and green, but not the blue channel.

The Cassini-Huygens mission is a cooperative project of NASA, the European Space Agency and the Italian Space Agency. The Jet Propulsion Laboratory, a division of the California Institute of Technology in Pasadena, manages the mission for NASA's Science Mission Directorate, Washington, D.C. The Cassini orbiter was designed, developed and assembled at JPL. The visual and infrared mapping spectrometer team is based at the University of Arizona, Tucson.