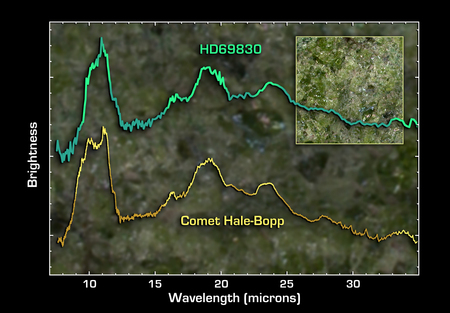 This graph of data from NASA's Spitzer Space Telescope demonstrates that the dust around a nearby star called HD 69830 (upper line) has a very similar composition to that of Comet Hale-Bopp. Spitzer spotted large amounts of this dust in the inner portion of the HD 69830 system.

The bumps and dips seen in these data, or spectra, represent the "fingerprints" of various minerals. Spectra are created when an instrument called a spectrograph spreads light out into its basic parts, like a prism turning sunlight into a rainbow. These particular spectra reveal the presence of the silicate mineral called olivine, and more specifically, a type of olivine called forsterite, which is pictured in the inset box. Forsterite is a bright-green gem found on Earth, on the "Green Sand Beach" of Hawaii among other places; and in space, in comets and asteroids.

Because the dust around HD 69830 has a very similar make-up to that of Comet Hale-Bopp, astronomers speculate that it might be coming from a giant comet nearly the size of Pluto. Such a comet may have been knocked into the inner solar system of HD 69830, where it is now leaving in its wake a trail of evaporated dust.

Nonetheless, astronomers say the odds that Spitzer has caught a "super-comet" spiraling in toward its star -- an unusual and relatively short-lived event -- are slim. Instead, they favor the theory that the observed dust is actually the result of asteroids banging together in a massive asteroid belt.

The data of HD 69830's dust were taken by Spitzer's infrared spectrograph. The data of Comet Hale-Bopp were taken by the European Space Agency's Infrared Observatory Satellite. The picture of forsterite comes courtesy of Dr. George Rossman, California Institute of Technology, Pasadena.