Ingredients of a Comet 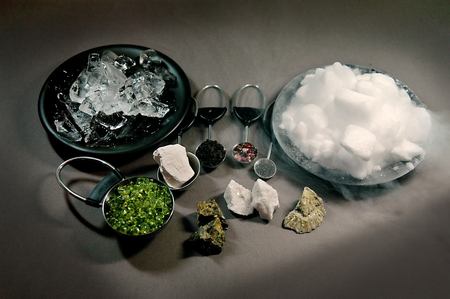 Astronomers using data from NASA's Spitzer Space Telescope and the Deep Impact mission are putting together a recipe for comet "soup" -- the primordial stuff of planets, comets, and other bodies in our solar system.

The comet ingredients were excavated from comet Tempel 1 on July 4, 2005, when Deep Impact's probe plunged below its surface. While Deep Impact was busy collecting data up close, other telescopes around the world were also watching from the ground and space.

Though the findings are still being analyzed, astronomers are already getting a good taste of our early solar system's history.

Spitzer observed the dramatic event using its infrared spectrometer. This instrument breaks apart light like a prism, allowing astronomers to pick out chemical signatures that appear between the wavelengths of 5 and 38 microns. So far, Spitzer has detected clays; iron-containing compounds; carbonates, the minerals in seashells; crystallized silicates, such as the green olivine minerals found on beaches and in the gemstone peridot; and polycyclic aromatic hydrocarbons, carbon-containing compounds found in car exhaust and on burnt toast. Hints of the mineral found in the reddish-brown gem spinel were also observed.

Deep Impact's spectrometer has picked up the signatures of additional molecules within the wavelength range of 1 to 5 microns, including water vapor and carbon dioxide gas (the swirling vapor that comes off "dry ice").

Materials are courtesy of Dr. George Rossman of the California Institute of Technology's Geology and Planetary Sciences department.