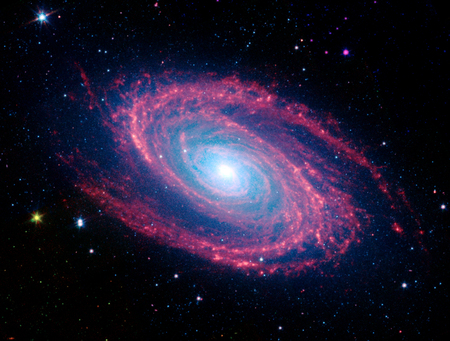 The magnificent spiral arms of the nearby galaxy Messier 81 are highlighted in this NASA Spitzer Space Telescope image. Located in the northern constellation of Ursa Major (which also includes the Big Dipper), this galaxy is easily visible through binoculars or a small telescope. M81 is located at a distance of 12 million light-years.

Because of its proximity, M81 provides astronomers with an enticing opportunity to study the anatomy of a spiral galaxy in detail. The unprecedented spatial resolution and sensitivity of Spitzer at infrared wavelengths show a clear separation between the several key constituents of the galaxy: the old stars, the interstellar dust heated by star formation activity, and the embedded sites of massive star formation. The infrared images also permit quantitative measurements of the galaxy's overall dust content, as well as the rate at which new stars are being formed.

The infrared image was obtained by Spitzer's infrared array camera. It is a four-color composite of invisible light, showing emissions from wavelengths of 3.6 microns (blue), 4.5 microns (green), 5.8 microns (yellow) and 8.0 microns (red). Winding outward from the bluish-white central bulge of the galaxy, where old stars predominate and there is little dust, the grand spiral arms are dominated by infrared emission from dust. Dust in the galaxy is bathed by ultraviolet and visible light from the surrounding stars. Upon absorbing an ultraviolet or visible-light photon, a dust grain is heated and re-emits the energy at longer infrared wavelengths. The dust particles, composed of silicates (which are chemically similar to beach sand) and polycyclic aromatic hydrocarbons, trace the gas distribution in the galaxy. The well-mixed gas (which is best detected at radio wavelengths) and dust provide a reservoir of raw materials for future star formation.

The infrared-bright clumpy knots within the spiral arms denote where massive stars are being born in giant H II (ionized hydrogen) regions. The 8-micron emission traces the regions of active star formation in the galaxy. Studying the locations of these regions with respect to the overall mass distribution and other constituents of the galaxy (e.g., gas) will help identify the conditions and processes needed for star formation. With the Spitzer observations, this information comes to us without complications from absorption by cold dust in the galaxy, which makes interpretation of visible-light features uncertain.

The white stars scattered throughout the field of view are foreground stars within our own Milky Way galaxy.