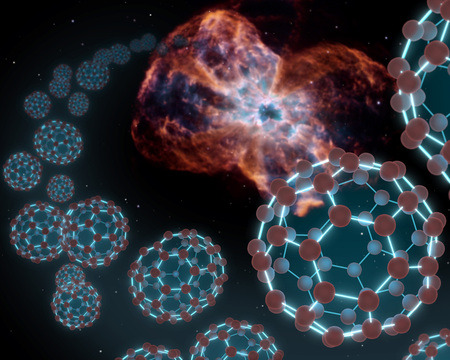 NASA's Spitzer Space Telescope has at last found buckyballs in space, as illustrated by this artist's conception showing the carbon balls coming out from the type of object where they were discovered -- a dying star and the material it sheds, known as a planetary nebula.

Buckyballs are made up of 60 carbon atoms organized into spherical structures that resemble soccer balls. They also look like Buckminister Fuller's architectural domes, hence their official name of buckministerfullerenes. The molecules were first concocted in a lab nearly 25 years ago, and were theorized at that time to be floating around carbon-rich stars in space.

But it wasn't until now that Spitzer, using its sensitive infrared vision, was able to find convincing signs of buckyballs. The telescope found the molecules -- as well as their elongated, rugby-ball-like relatives, called C70 -- in the material around a dying star, or planetary nebula, called Tc 1. The star at the center of Tc 1 was once similar to our sun but as it aged, it sloughed off its outer layers, leaving only a dense white-dwarf star. Astronomers believe buckyballs were created in shed layers of carbon that blew off the star.

Tc 1 does not show up that well in images, so a picture of the NGC 2440 nebula, taken by NASA's Hubble Space Telescope, was used in this artist's conception.