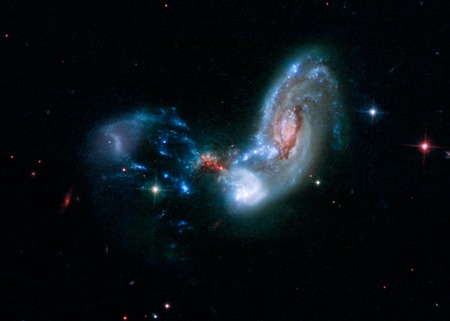 The merging galaxies known collectively as II Zw 096 are shown in this image from NASA's Hubble Space Telescope. This rendering combines light spanning the far-ultraviolet into the near-infrared.

Researchers using infrared data from NASA's Spitzer Space Telescope estimate the starburst is cranking out stars at the breakneck pace of around 100 solar masses, or masses of our Sun, per year. They were surprised to see such a brilliant infrared glow in an area so far offset from the center of the spiral galaxy. Starbursts are often found crammed into the very centers of merging galaxies, but this is the brightest starburst ever seen outside a galaxy's nucleus.

This Hubble image represents far-ultraviolet light at a wavelength of 0.15 microns as blue, visible light at 0.44 microns as cyan, and near infrared light at 0.9 microns as red.