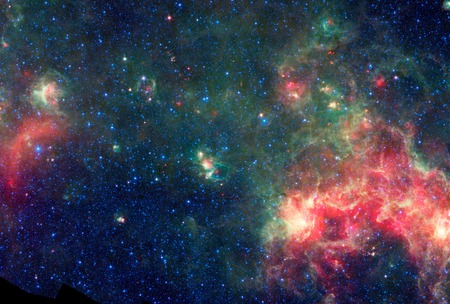 This is one segment of an infrared portrait of dust and stars radiating in the inner Milky Way. More than 800,000 frames from NASA's Spitzer Space Telescope were stitched together to create the full image, capturing more than 50 percent of our entire galaxy.

As inhabitants of a flat galactic disk, Earth and its solar system have an edge-on view of their host galaxy, like looking at a glass dish from its edge. From our perspective, most of the galaxy is condensed into a blurry narrow band of light that stretches completely around the sky, also known as the galactic plane.

This end segment extends through the constellations Centaurus and Crux. This sparse region falls between the Scutum-Centaurus and Sagittarius spiral arms and is largely lacking in dust and strong star formation.

The swaths of green represent organic molecules, called polycyclic aromatic hydrocarbons, which are illuminated by light from nearby star formation, while the thermal emission, or heat, from warm dust is rendered in red. Star-forming regions appear as swirls of red and yellow, where the warm dust overlaps with the glowing organic molecules. The blue specks sprinkled throughout the photograph are Milky Way stars.

This survey segment spans galactic longitudes of 294.0 to 302.2 degrees and is centered at a galactic latitude of 0 degrees. It covers about two vertical degrees of the galactic plane.