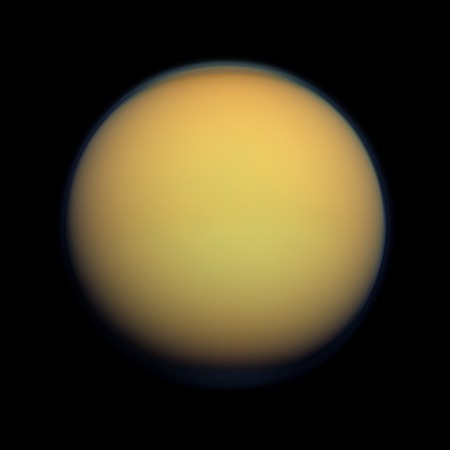 Titan's north polar hood is visible at the top of the image, and a faint blue haze also can be detected above the south pole at the bottom of this view. Recent Cassini images suggest Titan's north polar vortex, or hood, is beginning to flip from north to south.

Images taken using red, green and blue spectral filters were combined to create this natural color view. The images were obtained with the Cassini spacecraft wide-angle camera on Jan. 30, 2012 at a distance of approximately 119,000 miles (191,000 kilometers) from Titan. Image scale is 7 miles (11 kilometers) per pixel.

For more information about the Cassini-Huygens mission visit http://saturn.jpl.nasa.gov. The Cassini imaging team homepage is at http://ciclops.org.