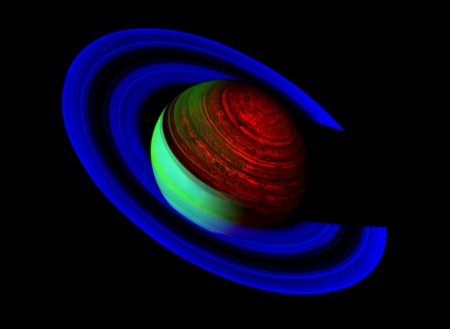 Flying over the unlit side of Saturn's rings, the Cassini spacecraft captures Saturn's infrared glow, represented in brilliant shades of electric blue, sapphire and mint green, while the planet's shadow casts a wide net on the rings.

This striking mosaic was created from 25 images taken by Cassini's visual and infrared mapping spectrometer over a period of 13 hours, and captures Saturn in nighttime and daytime conditions. The visual and infrared mapping spectrometer acquires data simultaneously at 352 different wavelengths, or spectral channels. Data at wavelengths of 2.3, 3.0 and 5.1 microns were combined in the blue, green and red channels of a standard color image, respectively, to make this infrared representation.

This image was acquired on Feb. 24, 2007, while the spacecraft was 1.58 million kilometers (1 million miles) from the planet and 34.6 degrees above the ring plane. The solar phase angle was 69.5 degrees. In this view, Cassini was looking down on the northern, unlit side of the rings, which are rendered visible by sunlight filtering through from the sunlit, southern face.

On the night side (right side of image), with no sunlight, Saturn's own thermal radiation lights things up. This light at 5.1 microns wavelength (some seven times the longest wavelength visible to the human eye) is generated deep within Saturn, and works its way upward, eventually escaping into space. Thick clouds deep in the atmosphere block that light. An amazing array of dark streaks, spots, and globe-encircling bands is visible instead. Saturn's strong thermal glow at 5.1 microns even allows these deep clouds to be seen on portions of the dayside (left side), especially where overlying hazes are thin and the glint of the sun off of them is minimal. These deep clouds are likely made of ammonium hydrosulfide and cannot be seen in reflected light on the dayside, since the glint of the sun on overlying hazes and ammonia clouds blocks the view of this level.

At 2.3 microns (shown in blue), the icy ring particles are highly reflecting, while methane gas in Saturn's atmosphere strongly absorbs sunlight and renders the planet very dark. At 3.0 microns (shown in green), the situation is reversed: water ice in the rings is strongly absorbing, while the planet's sunlit hemisphere is bright. Thus the rings appear blue in this representation, while the sunlit side of Saturn is greenish-yellow in color. Within the rings, the most opaque parts appear dark, while the more translucent regions are brighter. In particular, the opaque, normally-bright B ring appears here as a broad, dark band separating the brighter A (outer) and C (inner) rings.

At 5.1 microns (shown in red), reflected sunlight is weak and thus light from the planet is dominated by thermal (i.e., heat) radiation that wells up from the planet's deep atmosphere. This thermal emission dominates Saturn's dark side as well as the north polar region (where the hexagon is again visible) and the shadow cast by the A and B rings. Variable amounts of clouds in the planet's upper atmosphere block the thermal radiation, leading to a speckled and banded appearance, which is ever-shifting due to the planet's strong winds.

The Cassini-Huygens mission is a cooperative project of NASA, the European Space Agency and the Italian Space Agency. The Jet Propulsion Laboratory, a division of the California Institute of Technology in Pasadena, manages the mission for NASA's Science Mission Directorate, Washington, D.C. The Cassini orbiter was designed, developed and assembled at JPL. The Visual and Infrared Mapping Spectrometer team is based at the University of Arizona, where this image was produced.