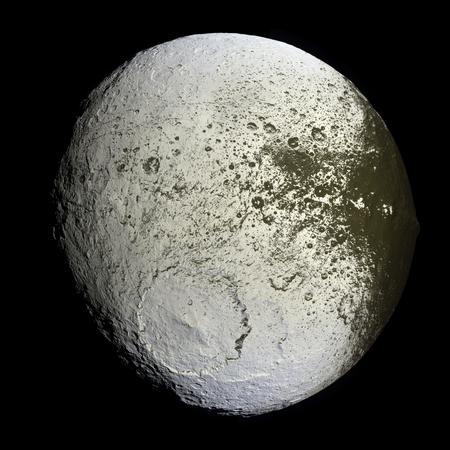 This false-color mosaic shows the entire hemisphere of Iapetus (1,468 kilometers, or 912 miles across) visible from Cassini on the outbound leg of its encounter with the two-toned moon in Sept. 2007. The central longitude of the trailing hemisphere is 24 degrees to the left of the mosaic's center.

Also shown here is the complicated transition region between the dark leading and bright trailing hemispheres. This region, visible along the right side of the image, was observed in many of the images acquired by Cassini near closest approach during the encounter.

Revealed here for the first time in detail are the geologic structures that mark the trailing hemisphere. The region appears heavily cratered, particularly in the north and south polar regions. Near the top of the mosaic, numerous impact features visible in NASA Voyager 2 spacecraft images (acquired in 1981) are visible, including the craters Ogier and Charlemagne.

The most prominent topographic feature in this view, in the bottom half of the mosaic, is a 450-kilometer (280-mile) wide impact basin, one of at least nine such large basins on Iapetus. In fact, the basin overlaps an older, similar-sized impact basin to its southeast.

In many places, the dark material--thought to be composed of nitrogen-bearing organic compounds called cyanides, hydrated minerals and other carbonaceous minerals--appears to coat equator-facing slopes and crater floors. The distribution of this material and variations in the color of the bright material across the trailing hemisphere will be crucial clues to understanding the origin of Iapetus' peculiar bright-dark dual personality.

The color seen in this view represents an expansion of the wavelengths of the electromagnetic spectrum visible to human eyes. The intense reddish-brown hue of the dark material is far less pronounced in true color images. The use of enhanced color makes the reddish character of the dark material more visible than it would be to the naked eye.

This mosaic consists of 60 images covering 15 footprints across the surface of Iapetus. The view is an orthographic projection centered on 10.8 degrees south latitude, 246.5 degrees west longitude and has a resolution of 426 meters (0.26 miles) per pixel. An orthographic view is most like the view seen by a distant observer looking through a telescope.

At each footprint, a full resolution clear filter image was combined with half-resolution images taken with infrared, green and ultraviolet spectral filters (centered at 752, 568 and 338 nanometers, respectively) to create this full-resolution false color mosaic.