Dusty Reflections in the Scorpions Claws 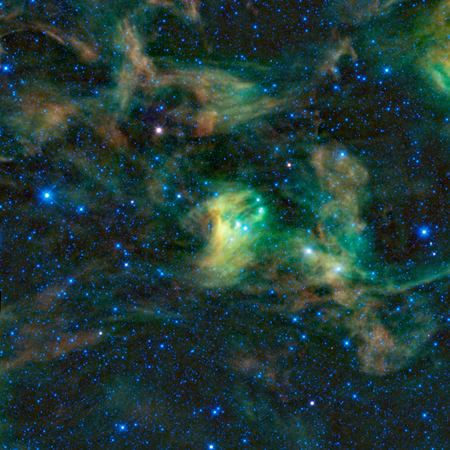 Between the claws of the dreaded scorpion imagined by the ancient Greeks lies this giant dust cloud, imaged by the Wide-field Infrared Survey Explorer, or WISE. The constellation of Scorpius is prominent in the summer night sky in North America. In visible light, this cloud, or nebula, appears dark with a ghostly blue shine about it. These types of nebulae are called reflection, because they are reflecting the light of nearby stars. The dust within the cloud reflects mostly blue light.

However, WISE sees infrared light invisible to the eye. In infrared light, we can see the dust itself glowing rather than simply reflecting light. The green and red colors in this image show dust at different temperatures, with the green dust being warmer than the red dust. The dust is warmed by the light of nearby stars. This interstellar dust contains the heavy elements that planets are made of, and plays a major role in the creation of new stars.

The nebula, known as IC 4601, is part of a larger complex of clouds where new stars are being born. Some of the red stars in this image may in fact be baby stars wrapped in blankets of dust. Perhaps the dreaded scorpion can be thought of as rocking the baby stars to sleep.