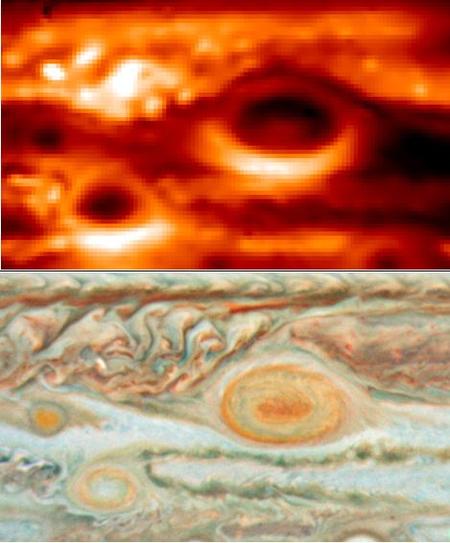 New thermal images from powerful ground-based telescopes show swirls of warmer air and cooler regions never seen before within Jupiter's Great Red Spot. The images enable scientists to make the first detailed weather map of the inside of the giant storm system. One observation illustrated by this image is the correspondence between a warm core within an otherwise cold storm system and the reddest color of the Great Red Spot.

The image on the top was obtained by the European Southern Observatory's Very Large Telescope in Chile on May 18, 2008. It was taken in the infrared wavelength range of 10.8 microns, which is sensitive to Jupiter's atmospheric temperatures in the 300 to 600 millibar pressure range. That pressure range is close to the altitude of the white, red and brown aerosols seen in the visible-light image on the bottom, which was obtained by the Hubble Space Telescope on May 15, 2008. These images show the interaction of three of Jupiter's largest storms -- the Great Red Spot and two smaller storms nicknamed Oval BA and Little Red Spot.