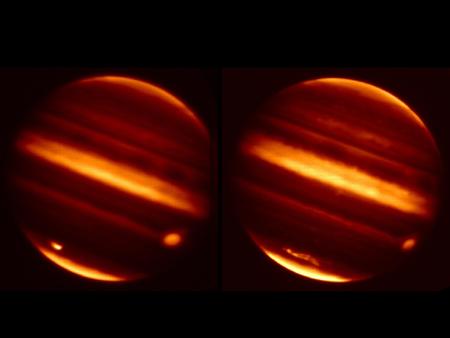 These infrared images obtained from NASA's Infrared Telescope Facility in Mauna Kea, Hawaii, show particle debris in Jupiter's atmosphere after an object hurtled into the atmosphere on July 19, 2009. The image on the left was taken on July 20, 2009, and the image on the right was taken on Aug. 16, 2009. The impact and its aftereffects can be seen as the bright spot on the lower left of the July 20 image and as the bright smudge on the lower left of the Aug. 16 image. By Aug. 16, the debris had been sheared apart by Jupiter's winds to a larger extent

The images were taken in wavelengths of radiation around 2.1 microns. Scientists assigned white to show the highest concentrations of particle debris. The Great Red Spot, a giant storm, can be seen in orange on the right side of the planet.