The Greatest Saturn Portrait... Yet 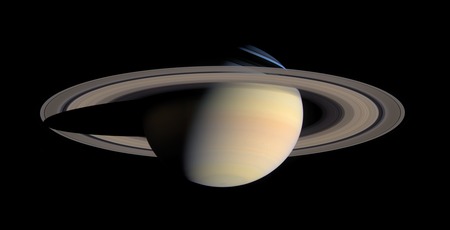 While cruising around Saturn in early October 2004, Cassini captured a series of images that have been composed into the largest, most detailed, global natural color view of Saturn and its rings ever made.

This grand mosaic consists of 126 images acquired in a tile-like fashion, covering one end of Saturn's rings to the other and the entire planet in between. The images were taken over the course of two hours on Oct. 6, 2004, while Cassini was approximately 6.3 million kilometers (3.9 million miles) from Saturn. Since the view seen by Cassini during this time changed very little, no re-projection or alteration of any of the images was necessary.

Three images (red, green and blue) were taken of each of 42 locations, or "footprints," across the planet. The full color footprints were put together to produce a mosaic that is 8,888 pixels across and 4,544 pixels tall.

The smallest features seen here are 38 kilometers (24 miles) across. Many of Saturn's splendid features noted previously in single frames taken by Cassini are visible in this one detailed, all-encompassing view: subtle color variations across the rings, the thread-like F ring, ring shadows cast against the blue northern hemisphere, the planet's shadow making its way across the rings to the left, and blue-grey storms in Saturn's southern hemisphere to the right. Tiny Mimas and even smaller Janus are both faintly visible at the lower left.

The Sun-Saturn-Cassini, or phase, angle at the time was 72 degrees; hence, the partial illumination of Saturn in this portrait. Later in the mission, when the spacecraft's trajectory takes it far from Saturn and also into the direction of the Sun, Cassini will be able to look back and view Saturn and its rings in a more fully-illuminated geometry.

The Cassini-Huygens mission is a cooperative project of NASA, the European Space Agency and the Italian Space Agency. The Jet Propulsion Laboratory, a division of the California Institute of Technology in Pasadena, manages the mission for NASA's Science Mission Directorate, Washington, D.C. The Cassini orbiter and its two onboard cameras were designed, developed and assembled at JPL. The imaging team is based at the Space Science Institute, Boulder, Colo.