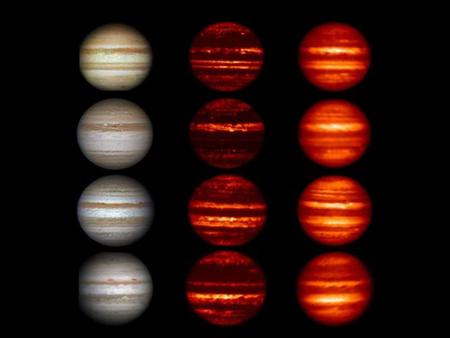 Images in the visible-light and infrared parts of the spectrum highlight the massive changes roiling the atmosphere of Jupiter. In the visible-light images on the left that were obtained by amateur astronomers, Jupiter can be seen "losing" a brown-colored belt south of the equator called the South Equatorial Belt (SEB) from 2009 to 2010. This belt returns in 2011 and is still present in 2012. From 2011 to January 2012, a belt north of the equator known as the North Equatorial Belt (NEB) can be seen to be thinning out. In 2011, it whitened to an extent not seen in over a century. In March of this year, after the last picture in this series was taken, the northern belt began to darken again.

Scientists compared the visible-light data to data obtained in infrared wavelengths of 4.78 and 8.7 microns (middle and right columns), which show progressively deeper levels in the Jovian atmosphere. The infrared images were obtained from NASA's Infrared Telescope Facility on Mauna Kea, Hawaii, except for the 2011 image in the 8.7-micron wavelength (right column, third from the top), which was taken by the Subaru Telescope, also in Mauna Kea, Hawaii. Those data showed a thickening of the deeper cloud decks in the northern belt during that time, and a partial thickening of the upper cloud deck. The South Equatorial Belt saw both levels of clouds thicken and then clear up. The infrared data also resolved brown elongated features in the whitened area of the North Equatorial Belt known as "brown barges" as distinct features and revealed them to be regions clearer of clouds and probably characterized by downwelling, dry air.

Also visible in the infrared observations are a series of blue-gray features that are the clearest and driest regions on the planet and show up as apparent hotspots in the infrared view because they reveal the radiation emerging from a very deep layer of Jupiter's atmosphere. Those hotspots disappeared from 2010 to 2011, but had reestablished themselves by June of this year, coincident with the whitening and re-darkening of the North Equatorial Belt.