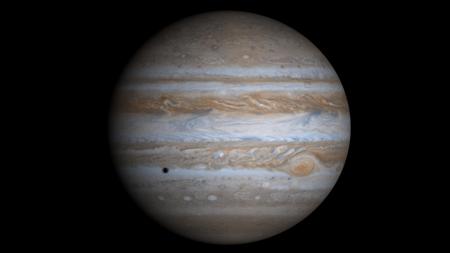 This true-color simulated view of Jupiter is composed of 4 images taken by NASA's Cassini spacecraft on December 7, 2000. To illustrate what Jupiter would have looked like if the cameras had a field-of-view large enough to capture the entire planet, the cylindrical map was projected onto a globe. The resolution is about 144 kilometers (89 miles) per pixel. Jupiter's moon Europa is casting the shadow on the planet.

Cassini is a cooperative mission of NASA, the European Space Agency and the Italian Space Agency. JPL, a division of the California Institute of Technology in Pasadena, manages Cassini for NASA's Office of Space Science, Washington, D.C.