The purpose of this lab is for students to determine the relationship between temperature and speed of molecules in a liquid.

Each lab group should have the following:

Heat and temperature are related, but they’re not the same. Heat is another name for thermal energy, the energy contained in the vibrations of atoms and molecules.  The amount of heat in a substance is the total vibrational energy of all the atoms and molecules that make up the substance.  Even substances we think of as freezing cold, like ice, have a lot of heat.

Put a pot of water on the stove, turn on the burner, and watch it. You’re adding heat, so the total vibrational energy of the water rises.

So what is temperature?

Temperature is not energy, but rather the average heat in a substance, or the amount of heat per molecule.

Why does temperature matter?

Temperature tells us how heat flows. If we take two objects of any size with different temperatures and put them in contact with each other, heat will flow from the one with higher temperature to the one with lower temperature. The amount of heat does not change, but its distribution does, as energy is transferred from the warmer object to the colder one.

To cool a warm glass of water, add ice. The glass of warm water starts with a good bit of heat. Ice also has heat, although not as much as liquid water, so adding ice actually makes the amount of heat in the glass rise. Once the ice is added, the amount of heat in the glass is fixed. At that point, the difference in temperature between the warm water and the cold ice requires heat to flow from the water into the ice. Removing heat from the water makes its temperature fall, while putting heat into the ice makes its temperature rise. This flow of heat continues until the ice melts and mixes with the water. The result is a glass of water that is both colder and fuller than it was before we added the ice. 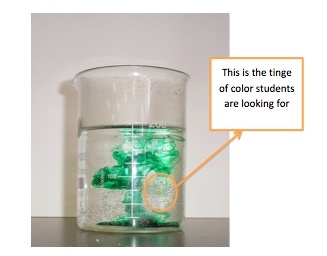 Heat is the energy an object has because of the movement of its atoms and molecules which are continuously jiggling and moving around, hitting each other and other objects. When we add energy to an object, its atoms and molecules move faster increasing its energy of motion or heat. Even objects which are very cold have some heat energy because their atoms are still moving.

To begin the lab, I have students record the temperature of the room temperature water and begin recording data for that beaker. As students are recording data, I circulate throughout the room and pour cold water into each groups’ beaker. As I am doing this, I am heating up water in the lab microwave. The water temperature should be hotter than room temperature, but not hot enough to cause injury. I have also done this lab while teaching in a math classroom and have had a coffeemaker on hand to heat the water. If you do not have enough glass beakers for every group, make sure the hot water beaker is glass, and the rest can be made of plastic.