Infrared images taken from satellites have aided the discovery of ancient human artifacts, roads, and footpaths all over the world, providing invaluable information to archaeologists.

Dr. Sarah Parcak from the University of Alabama used infrared satellite images to discover 17 lost pyramids, as well as more than 1,000 tombs and 3,100 ancient settlements in Egypt. 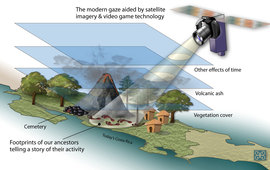 The oldest footpaths ever found in Costa Rica date to about 500 BCE. They were discovered underneath a thick canopy of jungle vegetation by using infrared sensors aboard an orbiting satellite.

The people who lived near the violent Costa Rican volcano Arenal followed the same pathway through the forest, from their village to their cemetery, over and over again. Thousands of footprints left a small trench, which filled up repeatedly during the volcano's eruptions, creating a very rich area for plant growth. The roots beneath the pathways showed up as faint straight lines in the satellite images, because they are especially thick, and produce more infrared heat.

Remote sensing has been used to detect ancient Roman and Incan roads, as well as prehistoric settlements such as buildings, walls, and agricultural fields around Chaco Canyon, New Mexico.

Many Egyptian tombs buried by sand over time have also been located using infrared images from satellites. The mud bricks used by ancient Egyptians are much denser than the sand and soil that surrounds them, allowing the shapes of homes, temples, tombs and other structures built thousands of years ago, which are invisible to the human eye, to be seen in infrared images taken from satellites orbiting 700 km (435 mi) above Earth.