License plate imaging cameras take pictures in 1/1000th of a second, to prevent blurring of the pictures as the cars move past each other. 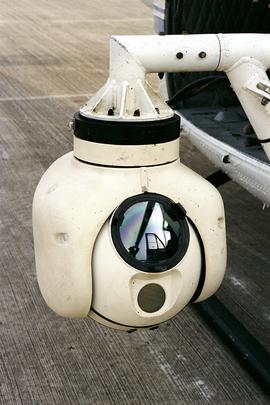 Police officers use infrared cameras when in pursuit of criminal suspects that are in moving vehicles, under dark or foggy conditions. A vehicle's engine and tires heat up due to friction with the pavement, producing an infrared glow, which can be easily detected and monitored by the officers.

Law enforcement officers also use infrared cameras when in pursuit of criminal suspects on foot, to better track them in the dark. The suspect's body heat is easily seen from a helicopter, which can then guide the chasing officers to the suspect's location. The New York City Police Department has even outfitted dogs in their K9 units with vests that have infrared cameras attached to them. The dogs can get into confined spaces, such as those in the underground subway system, more easily than their human counterparts can during a pursuit. Then, armed with the visual information provided by the dog, the officer determines how to apprehend the suspect.

This detection of body heat is also used by Border Patrol officers, who use infrared sensors to search for people trying to cross between countries at night, whether they are entering or leaving a country, or smuggling goods across the border. This technology can save lives in the hot summer months, when crossing the border in the middle of the scorching desert can prove fatal.

Security systems for homes and businesses regularly use infrared motion detectors to protect against burglars.

Many police cars now come equipped with small infrared cameras that can detect and read the license plates of surrounding cars. As the officer drives around on his or her normal duties, these cameras scan and upload license plate numbers to a central database, where they are matched to search for stolen vehicles and drivers with outstanding warrants and fines. The use of infrared technology helps to compensate for glare, low lighting, and wet conditions.

Police and the Drug Enforcement Agency use infrared technology to monitor the illegal growth of cannabis. As cannabis leaves have higher reflectivity in infrared wavelengths than other crops, they shine more brightly, even when planted among other vegetation meant to hide the cannabis plants. Police helicopters fitted with infrared cameras can fly over fields and national forest areas to detect any illegal cannabis crop growth from the air. A similar method is used to detect illegal drug crop growth in other parts of the world, this time using satellite remote sensing.

Infrared cameras on board aircraft are helping police to identify grave sites from unsolved murders, and to uncover animal graves that were dug by poachers to bury the evidence. Plant growth in these areas is slowed by the bodies, with plants on a recent grave site reflecting less infrared light than those around them.