Infrared sensors on satellites detect oil and chemical spills, buried waste, and pollution in rivers. They are also used to monitor “slash and burn” fires, which can lead to deforestation in tropical regions, like the Amazon Rainforest in Brazil.

"Slash and Burn" is a 12,000-year old method of clearing land for crops that is still used by 7% of the people on our planet!

In order to save indigenous species and protect the environment, the forestry service in Brazil is engaged in a campaign to monitor so-called "slash and burn" agriculture, where farmers cut down and burn forests to make room for planting crops.

Armed with this information, authorities can locate current deforestation and take action to stop it. NASA's Landsat satellites took this series of images between 1975 and 2001, showing enormous regions of forest disappearing in Rondonia, Brazil, as people moved into the area.

The systematic cutting of new roads into the tropical forest seen in 1986 led to wholescale clearing of the area by 2001.

Farmers use infrared mapping to diagnose their fields and predict crop yields. Areas where the crops are growing poorly may be a result of poor soil nutrition, or irrigation problems, and the infrared data can help the farmers to spot problems early. It can also be vital in the prevention of plant freezing, and the detection of diseased fruit and vegetable crops. Early detection of crop disease and pest infestation can be crucial to tackling the problem.

Police and the Drug Enforcement Agency use infrared technology to monitor the illegal growth of cannabis. As cannabis leaves have higher reflectivity in infrared wavelengths than other crops, they shine more brightly, even when planted among other vegetation meant to hide the cannabis plants. Police helicopters fitted with IR cameras can fly over fields and national forest areas to detect any illegal cannabis crop growth from the air. A similar method is used to detect illegal drug crop growth in other parts of the world, using satellite remote sensing.

Salmon require cool water over the length of a river system to successfully complete their complex life cycle. Humans have constructed dams on many of the major river systems inhabited by salmon, slowing the current and warming the water. Infrared cameras are used aboard helicopters to monitor river temperatures in order to improve salmon migration. 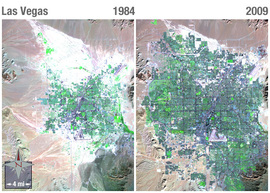 City planners use data from airborne infrared cameras to study heat distribution in urban areas. Cities are generally warmer than the surrounding countryside and so are called "heat islands".

This can affect urban weather and local climate. Trees help keep cities cool, and these studies indicate where trees should be planted.