Infrared technology can help scientists to predict volcanic eruptions, and to search for gold and silver hidden in the ground. 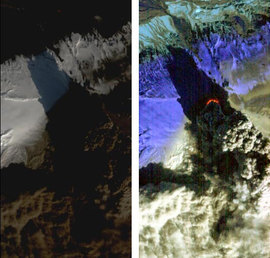 In 2010, Iceland's Eyjafjallajökull volcano erupted, seen in this image in matched visible and infrared wavelengths by NASA's Earth Observing-1 (EO-1) spacecraft. In the left-hand visible image, the volcano's brown, billowing plume conceals much of the detail of the eruption. In contrast, the color-coded, infrared image at the right shows far more detail than we can see in visible light, revealing the intense heat emissions pouring from the vent at the base of the massive plume.

Minerals absorb and emit infrared light. Using infrared data to measure ground temperatures reveals the amounts of different minerals in a particular area, as well as the distribution of rocks around them. Infrared data from aircraft have been used to find all kinds of minerals like olivine and basalt, and can be used to tell the difference between stable bedrock and more unstable sand covered rock and sandstone. This technique also helps geologists to distinguish between clay-bearing minerals and other minerals, which helps determine where to mine gold and silver ore.