Comets are like time capsules, telling us what conditions around the Sun were like when the Earth was first forming. Some, like Halley's comet, are regular visitors to our skies, while others have only been seen once in human history, and may only return every several hundred thousand years.

One astronomical unit, or AU, is equal to the distance between the Earth and the Sun, which is 150 million km; or 93 million miles. 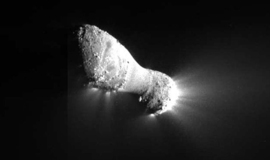 Comets are like dirty snowballs, made mainly of ice and frozen carbon dioxide with some dust and organic molecules, left over from the formation of the Solar System. They're like "time capsules," telling us what conditions were like in our Solar System 4.5 billion years ago, when the Sun and planets were first forming.

Comets were born in the icy outer regions of our Solar System. Occasionally, one will make its way in towards the Sun. As it starts to get close to the Sun, the comet warms up, and the ice, carbon dioxide and dust that are trapped inside start to evaporate, bursting out of the comet in bright jets. 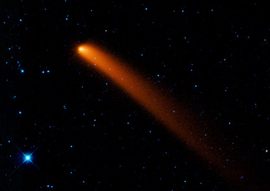 The solid part of the comet is called the nucleus. As the nucleus starts to evaporate, a coma, or cloud of this dust and gas, surrounds the nucleus. As more gas and dust are lost, the comet then forms a tail that is pushed away from the Sun by the pressure of sunlight. This dust tail is easily spotted with infrared telescopes, and it traces the comet's curved orbital path.

Comet Siding Spring is a great example of this: the dusty tail glows in the infrared, curving along its orbital path. The comet and its dust tail appear red because they are more than ten times colder than the bright blue stars in the background.

About once every ten years, a comet comes with a tail so bright that we can even see it with the naked eye. Astronomers hope that Comet ISON, due to swing past the Sun in late 2013, will put on a spectacular show. If it doesn't break up under the pressure of gases forcing their way out of the nucleus, it could look as bright as the moon, and may even be visible during the day. 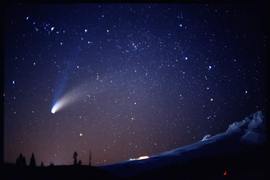 Comets often form a second tail, called the ion tail, or gas tail. As the name suggests, it is made of ionized gas, which also gets blown away by the Solar wind, and always points directly away from the Sun.  Comet Hale-Bopp was a bright comet that had two very distinct tails. The white dust tail and the blue ion tail could be seen pointing in slightly different directions - the blue ion tail pointing directly away from the Sun, and the white dust tail following the curve of the comet's orbit.

Astronomers believe that comets formed in both the Oort Cloud and the Kuiper Belt. The Oort Cloud is a vast, spherical shell of icy bodies left over from the cloud of gas and dust that formed the Sun, which surrounds the Solar System at a distance between 5,000 and 100,000 astronomical units (AU) away. Comets that come from the Oort Cloud are long period comets, which only come near the Sun for short periods of time, every few thousand years. They trace out large eccentric, or egg shaped orbits rather than circular orbits. Astronomers estimate that there could be as many as a trillion comets out in the Oort cloud.

Halley's Comet last visted the Earth in 1986. Can you calculate when it will next be back? How old will you be then?

Comets that orbit the Sun at much closer distances are called short-period comets and swing past the Sun more regularly. They are thought to have been formed in the Kuiper belt - a disk of icy worlds and rocky bodies that rings the Solar System at the orbit of Pluto and beyond. Comets that have been seen more than once in human history, like Halley's Comet (which visits the inner Solar System every 75-76 years), are all short-period comets.

How Big Are Comets?

Infrared light is very important for measuring the size of a comet. When we observe a comet in visible light, we see the light that the comet reflects from the Sun. Because of that, a large, dark comet can appear to be the same size as a small, highly reflective comet.  In infrared light, however, a comet's brightness depends upon the amount of heat it absorbs from the Sun and re-radiates back into space. A bigger comet has a bigger surface area, so it gives off more heat and looks brighter in the infrared. Comet nuclei range from a few hundred meters to tens of kilometers across, but their tails can stretch for millions of kilometers. 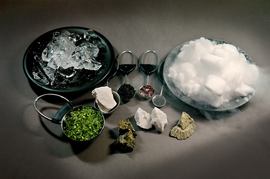 Comets are mainly made up from water and carbon dioxide ice, but the small amounts of dust can tell us a lot about the early solar system. Astronomers using data from NASA's Spitzer Space Telescope and the Deep Impact mission put together a recipe for comet "soup" -- the primordial stuff of planets, comets, and other bodies in our Solar System.

The comet ingredients were excavated from Comet Tempel 1 in 2005, when Deep Impact's probe plunged below the comet's surface. While Deep Impact was busy collecting data up close, other telescopes around the world were also watching from the ground and space. 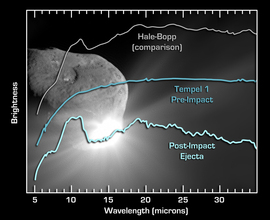 Spitzer observed the dramatic event using its infrared spectrograph, an instrument that breaks apart light like a prism, allowing astronomers to pick out chemical signatures that appear between the wavelengths of 5 and 38 microns. Spitzer detected clays; iron-containing compounds; carbonates, the minerals in seashells; crystallized silicates, such as the green olivine minerals; and polycyclic aromatic hydrocarbons, carbon-containing compounds found in car exhaust and on burnt toast. Hints of the mineral found in the reddish-brown gem spinel were also observed.

Deep Impact's spectrometer also picked up the signatures of additional molecules within the wavelength range of 1 to 5 microns, including water vapor and carbon dioxide gas (the swirling vapor that comes off "dry ice").

Comets Around Other Stars 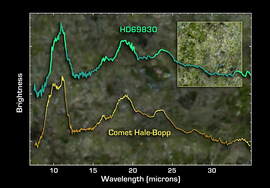 Our Solar System is not the only place to find comets in the Universe. Spitzer has revealed the telltale signature of comet dust around other stars. The silicate mineral, olivine, in the form of forsterite, was detected in the dust around a star called HD 69830, and found to match the dust seen in Comet Hale-Bopp.

Forsterite is a bright green gem found on Earth, on the green sand beaches of Hawaii, among other places.  Olivine is one of the main ingredients of the Earth's interior. You might even say that we live on a congealed pile of mineral dust, like the dust contained in the comets that swarmed around the Sun 4500 million years ago. That same mineral dust is now seen around other stars, like HD 69830. 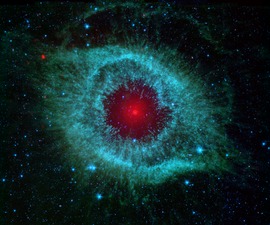 Evidence for comets has even been seen around dying stars. The Helix Nebula is one of the most famous images from Spitzer, showing a dying star unraveling its outer layers out into space. The bright pink glow in the center is the combined ultraviolet and infrared glow of a dusty disk encircling the fading star, most likely kicked up from comets that survived its final death throes. Before the star died, its comets, and possibly planets, would have orbited the star in an orderly fashion, much like our own Solar System today. When the star ran out of hydrogen to burn, and blew off its outer layers, the icy comets would have been tossed about and into each other, kicking up an ongoing cosmic dust storm.

For more on how stars die, see Star Death.

As comets are relics from the protosolar nebula (before the Sun was a star), they played a major role in the formation of the planets. According to some theories, a substantial fraction of our oceans may have formed from the ice of comets that bombarded the Earth. Other theories suggest that carbon compounds contained in comets may have contributed raw materials for the origin of life on the Earth. Understanding more about the composition and behavior of these icy time capsules is therefore crucial for a fuller understanding of our cosmic origins.