Fusion makes the difference between stars and those that don't quite make the A-list. Star-like objects that don't ever start fusion in their cores are called "Brown Dwarfs." They are cool, and therefore dark in visible light, but glow far more brightly in infrared light, where they can be picked up with telescopes like Spitzer and WISE.

The Sun is unusual--most stars are low-mass and in multiple star systems.

Our Sun is quite a bit heavier than most stars. In fact, the average mass of a star in our galaxy is only about half the mass of the Sun, making the average star a low-mass star. Because brightness depends on mass, these low-mass stars are cool, red, and quite a bit fainter than stars like the Sun...in visible light! They show up much more brightly in the infrared, because that's where they emit most of their light. While they’re still hard to find, it's important to study them, since they make up more than half the stars in the Galaxy!

Stars of all sizes form approximately the same way: gravity slowly pulls gas and dust from an interstellar cloud into a rotating disk, and from the disk onto an ever-growing stellar seed or protostar.  Or, it could be protostars; about half the time, two or more stars form from the same disk! How big a star becomes depends on how much material its protostar received. If a cloud is of low density, or if several protostars form from a single disk, the stars will probably be low-mass, whereas a disk in a high-density cloud feeding a single protostar can make a monster star. As protostars form, planets form in their rotating disks; gravity pulls material onto tiny planetary seeds, so small that they grow very, very slowly, never ending up having close to a stellar mass.

If Jupiter had formed from a stellar seed, it would be a star--and the Earth would probably be uninhabitable, because stable planetary orbits in binary star systems that allow liquid water are hard to find.

Why is Jupiter just a huge planet instead of a tiny star? What makes a star a star? In a word, fusion. Nuclear fusion.

Nuclear fusion is the process of slamming atomic nuclei into each other at very high speeds, causing the nuclei to fuse together and form an entirely new atom. The Sun, like most stars, shines by creating energy through nuclear fusion in its core. Four hydrogen nuclei, each with a single proton, are combined into a helium nucleus, with 2 protons and 2 neutrons. The helium nucleus has a tiny bit less mass than 4 hydrogen nuclei put together -- and that difference is converted into energy, via Einstein's equation E = mc2. Each individual fusion reaction gives off only a tiny bit of energy, but a huge number of reactions occur every second, generating all the heat and light we get from the Sun.

The process of nuclear fusion requires the hydrogen to be at a pressure greater than about 2x1016 Pascal (2x1011 atm). The core of a star reaches that tremendous pressure because the humongous mass of the rest of the star is pressing down on it. The minimum amount of mass for fusion is around 80 times the mass of Jupiter (or a less than a tenth of the mass of the Sun); objects with 80 times the mass of Jupiter begin fusion, and objects of lesser mass do not. 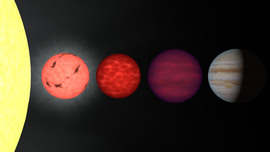 Brown dwarfs are an odd set of objects that are neither planets nor stars. Rather than forming like planetary seeds in the disks around protostars, brown dwarfs begin on their own like stellar seeds. However, they never pull in enough material to start nuclear fusion; instead, they slowly contract, cool, and glow in the infrared from the release of gravitational energy, like Jupiter. Eventually, they simply fade away. Some people think of brown dwarfs as failed stars.

Although brown dwarfs never truly become stars, some of them are able to act the part, for a short while. To start fusion, the very lowest-mass stars need about 80 times the mass of Jupiter. However, if a brown dwarf has at least 13 times the mass of Jupiter, it can ignite a limited form of fusion. These brown dwarfs fuse a heavy isotope of hydrogen, called deuterium, into helium, releasing energy like a star. Nuclear fusion ends once the supply of deuterium is used up, and that supply is very limited. Once fusion ends, the brown dwarf goes back to contracting, cooling, and glowing.

Beginning in 1997 with the 2MASS project and continuing through the Spitzer and WISE missions, IPAC astronomers have been at the forefront of the discovery and study of brown dwarfs. Their latest estimates from the WISE data say about 1 brown dwarf exists for every 6 stars in the galaxy.

Something to think about: because the majority of the stars in the Galaxy are low-mass and give off most of their light in the infrared, if aliens exist and ever do visit us, they’ll probably have infrared vision! Our own eyes evolved to make maximum use of the Sun’s light, which peaks in the visible. Since most stars are low-mass, aliens would most likely be coming from a low-mass star, and their eyes would have evolved to use their home star’s infrared light.