Infrared technology allows astronomers to peer into the heart of star-forming regions, where new stars are being created from towering clouds of dust and gas. While these clouds block visible light, infrared light can pass through all but the most dense regions, and has allowed us to explore the first steps along the path towards building new solar systems. 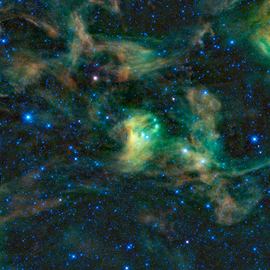 Stars form from the simplest of building blocks - huge clouds of gas and dust that permeate the Galaxy. It's hard to believe, but everything in our Solar System, from the Sun to the planets, ocean, plants and us, was once a cloud of gas and dust spread out over a large area of space.

There is a lot more hydrogen gas in interstellar space than dust. However, whenever we see a dust cloud we know the gas there is especially dense.

While these big clouds of dust and gas lay dormant for many millions and perhaps billions of years, eventually some of them are disturbed. This can happen gradually, maybe caused by the approach of one of the Milky Way's spiral arms as it slowly sweeps around the center of the galaxy, or it can be a sudden event, like a nearby supernova explosion that blasts a shockwave through the cloud. Either way, a small increase in the pressure and density of the cloud forms knots in the gas and dust that eventually collapse under their own gravity, pulling more and more of the surrounding material in, and forming the stellar "seeds" known as protostars.

From Protostar to Star 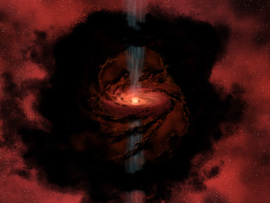 Artist's concept of a protostar

As the clouds collapse, they start to rotate, and, like a spinning skater pulling in her arms, each of these seed protostars begins to spin faster the more it collapses. The material falling towards the protostar flattens out into a rotating disk of dust and gas encircling the central core. The protostar warms up, as the potential energy of the material falling in is converted into kinetic energy, but it has not yet ignited to form a fully-fledged star. 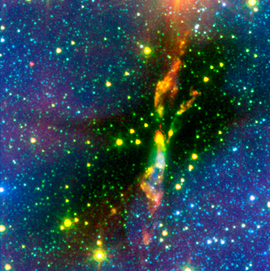 Protostellar jets around a baby star

Jets can be found around many objects in the Universe, not just baby stars. They can be seen around old stars, and even form from the disks of material falling into black holes!

As the star is fed material from the surrounding disk, a small amount of it gets caught up in the forming star's spinning magnetic fields and is flung out along its axis of rotation. These protostellar jets are commonly found around most young stars. Where they impact the surrounding gas, they light up, giving astronomers glowing markers that point back to the source infant stars.

The density and temperature of the protostar keep climbing higher and higher, until eventually the core grows to about one tenth the size of our Sun, and becomes hot and dense enough for hydrogen nuclei to spontaneously stick together to form helium, in a process called nuclear fusion. At that instant, the core ignites, and the new star is born. Meanwhile, in the disk, clumps of material have been forming, which are the seeds of new planets. These seeds sweep up material in the disk in a process called accretion, forming the planets of a new solar system.

Once the star has started nuclear fusion, the heat and wind from the infant star begin to blast the gas and dust away, creating a cavity in the cloud. As more and more matter gets funneled onto the star from the disk, the star gets larger and larger, causing it to push harder and harder against the cloud and the disk, enlarging the cavity, vaporizing the disk, and halting the growth of planets.

Sequence of star formation through a spiral arm

The process of star-formation has traditionally been difficult for astronomers to observe.  From the time the knot of dust begins to collapse until the protostar becomes a star, the stellar seed is warming up, but is not hot enough to give out large amounts of visible light. Not only that, but the whole process takes place deep inside dense clouds of dusty gas, so the small amounts of visible light that are given out by the protostar are immediately swallowed up. 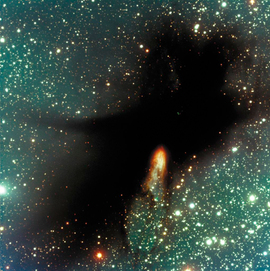 Looking at the clouds from the outside, all we see from Earth is the dark exterior, with no view of the dramatic action taking place in the center. The visible light from a very young star can only escape the cloud once the cavity created by the star grows large enough to poke a hole through the cloud. Then, like a chick breaking out of an egg, the star’s light pours into the galaxy. It can take millions of years for this process to happen, by which time the stars are no longer fledglings, but are fully formed and shining brightly.

In order to study the very first steps of star formation, astronomers have, instead, turned to infrared astronomy. The warm protostar, while not hot enough to give out visible light, glows with an abundance of infrared light. Moreover, the wavelength of infrared light allows it to pass straight through the surrounding dusty clouds as if they were barely even there, and so all of this infrared light reaches Earth and allows us to study the very earliest stages of the star formation process.  With our infrared telescopes, we have been able to peer deep into the dusty cocoons and watch the whole process, from the formation of protostars to the final ignition of nuclear fusion in their cores. 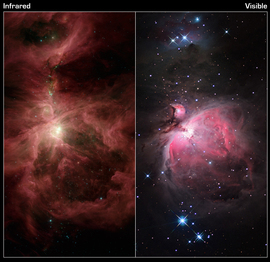 The Orion Nebula is one of the only star-forming nebulas that can be seen with the naked eye. It is sometimes called the "Sword of Orion" since it appears to hang below Orion the Hunter's belt.

The Orion Nebula (M42) is our closest massive star-making factory. Found in the sword area of the winter constellation Orion the Hunter, the nebula is 1,450 light-years from Earth. Formed in a cold cloud of gas and dust, the nebula contains about 1,000 young stars, which illuminate the cloud, creating the beautiful swirls of material seen in infrared.

Images from infrared telescopes like Spitzer have shown us the dusty side of this bright nebula. Dark patches in the visible light view (right side) glow brilliantly in mid infrared light (left side). In the center of the Orion Nebula are four monstrously massive stars called the Trapezium, which are about 100,000 times as luminous as the Sun. The heat and wind from these stars is making a cavity in the surrounding cloud, by blasting gas and dust away.

Just above this brightly glowing bowl lies the densest area of the cloud, which looks completely dark in the visible light image. Here we see hints of some of the very youngest stars in this area starting to form. In this view from Spitzer, we see infrared clouds in red, numerous protostars in green, and fuzzy green globs which are the result of jets of gas that are shot into the clouds by young stars and protostars. Stars in both images that are not associated with the nebula are seen in blue. 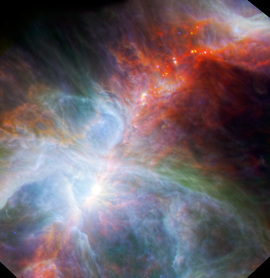 Orion in the far infrared

Combining infrared light from Spitzer with even longer wavelengths of light from the Herschel telescope reveals more of this dense filament of dust. This rainbow-colored image is showing us how the dust temperatures vary throughout the nebula. The hottest dust appears blue, heated by the light of young stars like the Trapezium. The coldest areas, which are only tens of degrees above absolute zero, glow faintly only at the very longest wavelengths seen by Herschel, and appear red in the image.

No single wavelength of light, or even small slice of the spectrum, can possibly tell the whole story of star formation. Each of these images brings out features not seen in the others, and each palette of color illuminates a different side of the story of how stars are born. 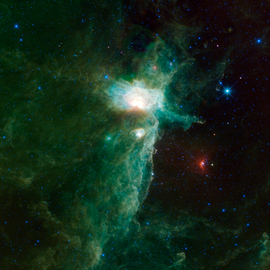 The famous "Horsehead Nebula" is an opaque dark cloud in the shape of a horse's head that can usually be found just below the Flame Nebula. However, since dust becomes transparent in the infrared, the Horsehead has simply faded away in this image!

The Flame Nebula is another vast cloud of gas and dust where baby stars are being born. It too can be found in the constellation of Orion, on the left side of the three distinctive stars making up the "belt." It is being lit up by a star inside 20 times the mass of the Sun, and would be as bright to our eyes as the stars in Orion’s belt if it weren’t for the dust surrounding it, which makes it appear four billion times dimmer than it actually is! As a comparison, two of the three stars that make up Orion’s belt can be seen just to the right of the Flame nebula. This distinctive image comes from the Wide Field Infrarared Survey Explorer (WISE) which surveyed the entire sky in infrared light.

An intriguing feature in this image is the bright red arc to the lower right of the nebula. The arc surrounds a multiple star system, 1,070 light-years away in the sword of Orion, called Sigma Orionis. The star system moves through space at the breakneck speed of 50 kilometers per second (113,000 miles per hour). At that speed, winds from Sigma Orionis crash into the gas and dust outside of it and create a shock wave (called a "bow shock"), where the material in front of the speeding system piles up. The energy from the bow shock heats up the dust in the region and makes it glow in the infrared.