Infrared light has enabled us to measure the speed of the expansion of the Universe, and is the only way to spot the earliest galaxies that formed when the Universe was very young.

The Expansion of the Universe

In 1929, Edwin Hubble published one of the most important papers in cosmology, showing that the further a galaxy was from Earth, the faster it is moving away from us. While the implications of this may not be immediately obvious, this discovery was the critical piece of evidence that pointed towards the idea of a beginning for time and space, which we now call the Big Bang.

Hubble made his historic observations of galaxies using the 100" Hooker telescope on Mt Wilson, near Los Angeles, California

Hubble measured the distances to a number of galaxies, which had been long believed to be "nebulae" within our own Milky Way Galaxy. His measurements, which built on the research of Henrietta Swan Leavitt, showed that these "nebulae" were far too distant to be part of our own galaxy, and were, in fact galaxies in their own right. Having measured the distances to the galaxies, Hubble worked with fellow astronomer, Milton L. Humason, to measure the galaxies' redshifts to determine how quickly they were moving.

Redshift is a term that refers to a shift in the wavelength of light from an object resulting from its motion towards or away from us. It is caused by the doppler effect, which we commonly encounter here on Earth with sound waves. You may have heard the pitch of the siren on an energency vehicle changing as it passes you on the street. If it moves towards us we hear a higher pitch (or frequency), while the pitch shifts lower if it is moving away from us. The shift is stronger the faster the vehicle is moving.

Light waves, like sound waves, are subject to the doppler effect, and Hubble was able to use this phenomenon to measure the speeds of galaxies. Indeed he found that not only were galaxies all moving, almost all of them were moving away from us. This shifted their light to longer wavelengths, more towards the red side of the spectrum. When he combined that information with their distances, the result changed the way we view the Universe. 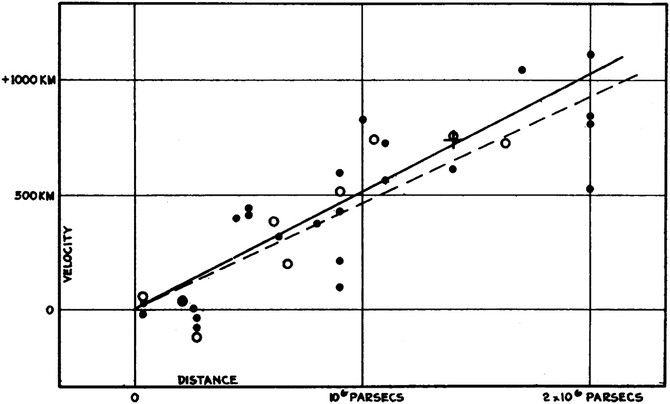 Hubble's historic plot that revealed the expansion of our Universe

One consequence of the Hubble Law is that if you want to look at the most distant galaxies in the universe, their light will be shifted entirely into the infrared part of the spectrum!

Until astronomers developed infrared telescopes, the most distant universe was hidden from them.

Hubble found that the further away a galaxy was from us, the faster it was moving away from us. This is called Hubble's Law and, when plotted, the slope of the graph is called the Hubble Constant.

Even more strangely, research since Hubble's time has shown that all these galaxies are not moving through space at great speeds, rather space itself is expanding. The galaxies are moving farther and farther apart like beads strung along a stretching band of elastic. Taken together with Hubble's law, the implicaiton is that everything—matter, energy, space, and even time—all started as a singularity—a point of infinite density, without any size at all.

Of course, we now call this moment the Big Bang. An incredible amount of data collected over the last century has strengthened the case for the Big Bang, and also shown it to be even more bizarrely strange than first thought. But the core of the idea traces to these first simple observations, and the implications fundamentally affect the way we study the distant universe, relying on infrared observations to do so.

Looking out into deep space is the same as looking back in time. Light takes time to travel through space, and so the further away we look, the further the light has had to travel to reach us, and the longer it has taken since leaving the distant source. Our Sun is 8 light-minutes away from us, which means it takes 8 minutes for light to travel to us after leaving the Sun. This means that we are seeing the Sun as it was 8 minutes ago, not as it is right now. The Sun could completely disappear, and we would have no idea until 8 minutes later. The same is true about other objects in the night sky. The closest star to us is 4 light years away, so light takes 4 years to travel to us from that star, and we're seeing the star as it looked 4 years ago. 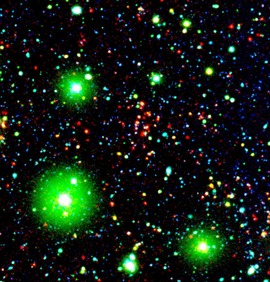 The further out we look, the further back in time we go. By the time we're looking at galaxies millions or billions of light years away, we're looking back in time millions or bilions of years, to a time when the Universe was only a fraction of its current age. This is hugely useful to astronomers: the further out we can see, the better we get an idea of what the Universe was like in its infancy.

All of this means that we are always searching for the furthest, and therefore earliest, galaxies. One problem with finding these most distant galaxies is that their light has been redshifted so much that they can no longer be seen in visible wavelengths at all. The light has been stretched completely out of the visible waveband, into the infrared. Infrared observations are therefore vital for finding and measuring the properties of these earliest galaxies, closest to the time of the Big Bang. 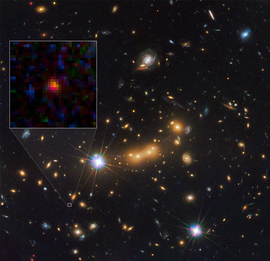 MACS0647-JD, the most distant known galaxy

The record for the furthest galaxy is currently (in 2013) held by MACS0647-JD, which is thought to be 13.3 billion light years away. It existed when the Universe was only 420 million years old, or 3% of its current age. The Hubble Space Telescope snapped a picture of this ancient object thanks to the gravitational effects of a nearby galaxy cluster, which amplified the light from MACS0647-JD through a phenomenon known as "gravitational lensing," making it far brighter than it would otherwise appear.

The cumulative light generated by all galaxies throughout the history of the Universe is contained within the Cosmic Infrared Background (CIRB). The CIRB is a diffuse background that is a combination of all light from outside our Galaxy generated by stars and dust which, due to the expansion of the Universe, is primarily at infrared wavelengths. By studying the total level of the CIRB and its fluctuations across the sky we can get a better understanding of the formation of stars and galaxies.

90% of the Earth's atmosphere is in a thin band, only 10 km high. That 10 km is all that protects us from deep space.