Our Solar System is just one of hundreds of billions of similar solar systems that form the swirling disk of our Milky Way Galaxy. We live in our Galaxy's suburbs and, like all our neighbors, we hurtle through space under the influence of the summed gravity of all the other stars, gas, dust, and mysterious dark matter that together form the Galaxy. In the very middle of this gravitational whirlpool is the strange region known as the “Galactic Center.”

Stars of the Milky Way Seen in Infrared Light

The centers of other large galaxies are generally easy to spot. Located inside of the swirling spiral arms, they tend to greatly outshine the rest of their galaxies, thanks to the very large number of stars that are packed in there.

Stars in the Galactic Center are so concentrated that they typically are only a few light weeks away from each other. In contrast, our local neighborhood of stars are separated from one another by light years. If we found ourselves on a planet near the Galactic Center, our nighttime sky would light up in a blazing display every night, filled with stars as bright as the planet Venus looks to us. 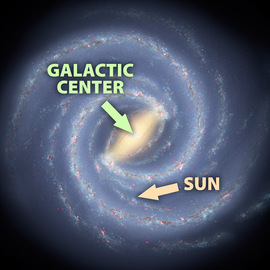 One might then conclude that the center of our Galaxy should be easy to spot. However, there’s a problem – it is essentially hidden from us in visible light. This is because we live out in the disk of the Milky Way – a disk that is filled with clouds of dust that form a kind of interstellar “smog.” The dust filters out the visible light from distant parts of the galaxy and so the center simply cannot be seen even when we are looking right at it.

Astronomers did not begin to figure out where the center was hiding until the early 20th century. Harlow Shapley made a pretty good deduction of its general location by looking at the way star clusters in the rest of the Galaxy were distributed. He concluded it was towards the constellation of Sagittarius, but it took a revolution in infrared telescopes before we finally could precisely see the region.

In infrared light the view through the galactic plane becomes stunningly different. Dust becomes virtually transparent at these longer wavelengths, and the “smog” fades away to reveal the bright Galactic Center. If we humans had infrared eyes, even the most ancient stargazing cultures would have known exactly where it was located.

The Galactic Center in Visible and Infrared Light

About the Galactic Center

Our Galaxy’s center falls within the constellation of Sagittarius, which can best be seen at night during the month of August. It is about 27,000 light years away from us, which places us about halfway out in the Milky Way’s disk. A bulge of stars surrounds the center, blending with a straight bar-like glow of stars that connects the center region to the spiral arms of our Galaxy. 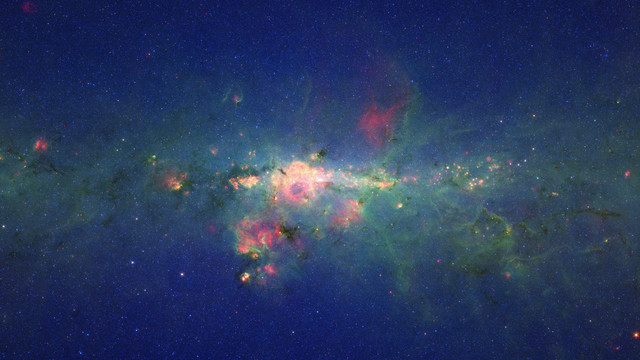 Dust and Stars at Our Galaxy's Center

The appearance of the Galactic Center changes depending on how far into the infrared spectrum we push our observations. Pictures taken by 2MASS are in near-infrared wavelengths, and show how the dust has started to become transparent, allowing us to see more and more of the starlight. Moving to longer mid- and far-infrared wavelengths, taken with the Spitzer and Herschel space telescopes, the stars become faint, but the dust itself begins to glow.

At wavelengths of around 5 to 15 microns (mid infrared), this glow is largely produced by the fluorescence of dust grains containing loops of carbon atoms, glowing under the light of stars. From 20 to 50 microns (mid to far infrared), we are instead seeing the thermal blackbody glow from the warmer clouds of dust heated by the light of newborn stars. At longer wavelengths of 100 microns or more (far infrared), we begin to see the thermal glow of the very coldest dust, only a dozen or so degrees above absolute zero. 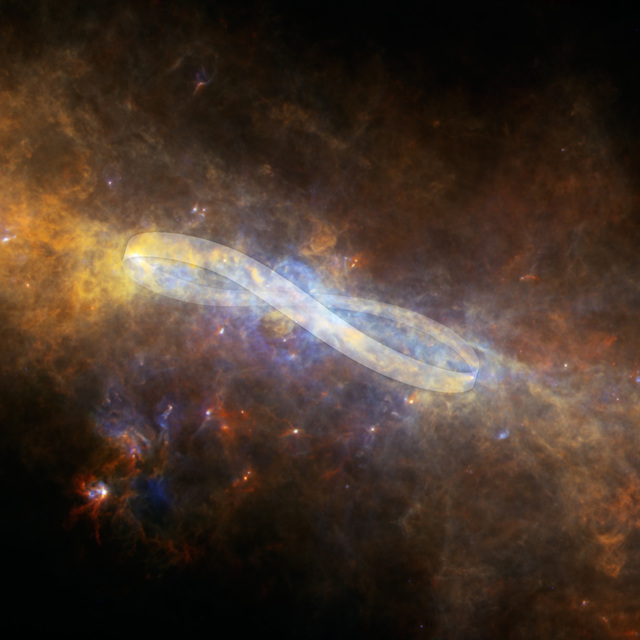 Far infrared light is the only good tool we have for observing these coldest clouds of dust in the inner Galaxy. Seeing the full distribution of dust, which is also intermixed with gas, helps us understand more about our Galaxy’s structure. For instance, astronomers studying the dust patterns at wavelengths of 70 to 350 microns identified an odd, cold dust ring that is about 300 light years across. Curiously, it is in a figure-8 shape, suggesting the ring is slightly twisted. These kinds of warps can be caused by gravitational interactions between galaxies as they pass one another or merge, hinting at interesting close encounters in the Milky Way’s recent history. 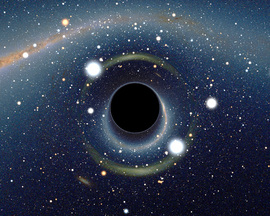 Simulation of a Black Hole

Perhaps the most intriguing feature of the Galactic Center is the incredibly massive black hole it is thought to harbor. Astronomers have found growing evidence that most, if not all, galaxies have giant black holes at their cores. But while these objects can be millions of times more massive than the Sun, they are physically tiny and virtually impossible to detect directly. Instead, we look for hints about how they affect their surroundings. Finding supermassive black holes is a bit like investigating a crime scene – the perpetrator isn’t anywhere to be seen, but there is still a lot of evidence about their identity.

Astronomers found the first real evidence for a supermassive black hole in our Galaxy in 1974 when they detected strong radio emissions coming from a spot they called Sagittarius A*. These radio waves are a kind of “smoking gun,” hinting there is a disk of material orbiting around a massive, unseen object. 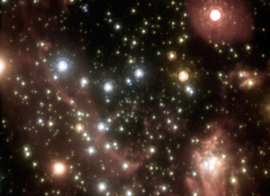 Stars at the Galactic Center

So how can we really be sure this supermassive black hole is really there? After all, all we have so far is a source of a lot of radio waves, and a theory. Even though we cannot see it directly, we are able to observe its influence on other objects, namely stars, that are very close to it.

Since 1995, astronomers have been able to use infrared telescopes to observe individual stars in the Galactic Center right in the Sagittarius A* region. By repeating the observations year after year, the motions of these stars can be mapped out.

Normally stars move very slowly over time, but these stars are whipping around at such astonishing speeds we can see their positions shift year by year. They trace out the elliptical orbits we would expect to see if they were orbiting a massive, unseen object. One of the stars, known as S0-102, completed a full 409 billion-mile orbit in a mere 11.5 years, traveling at over 3000 miles per second. 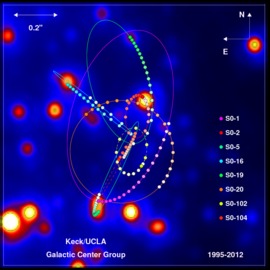 Star Orbits at the Galactic Center

The shapes of the orbits of these stars confirms they are all orbiting a single small object, and the timing of the orbits allows astronomers to calculate that the object's mass is 4 million times greater than that of our Sun.

To date, a black hole is the only theory of physics that can explain that observation.

It almost sounds like astronomers have done the impossible. Using infrared light, they have measured the mass of a black hole that, by definition, cannot be seen at any wavelength of light at all.