IR cameras for measuring weather and climate are launched into space on satellites, carried on aircraft, or sent high into the stratosphere on high-altitude balloons. 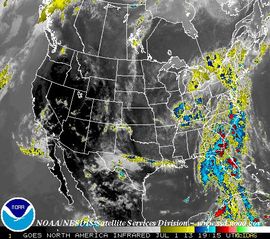 Thermal infrared images from Earth-orbiting satellites are used night and day to monitor cloud cover, track cloud temperatures and heights, and warn us of hurricanes, tornadoes, and supercell thunderstorms.

By reviewing these images, meteorologists are able to study long-term weather phenomena like the Pacific Southern Oscillation. As a result they were able predict the 1998 El Nino event, and warn authorities on the West Coast to prepare for torrential rains and heavy snowfalls months before they arrived.

Satellites carrying infrared radiometers allow us to track and monitor large-scale currents, such as the Gulf Stream, and the eddies they form. Eddies mix warmer and cooler water temperatures, last from weeks to months, and affect the distribution of marine life.

There are two types of eddies, defined by whether the water at the center of the eddy (the core) is warm or cold. Cold-core eddies are usually rich in nutrients, while warm-core eddies are relatively poor in nutrients like nitrates, phosphates, and silicates, which phytoplankton (algae) need to survive. Zooplankton (extremely small animal organisms), depend on phytoplankton as a food source. Larger animals, including fish and sea turtles, feed on zooplankton – this is the start of what is known as “oceanic food chain.”

Because eddies tend to make some parts of the ocean more productive than others, which in turn affects the oceanic food supply, locating and monitoring eddies is vitally important to everyone who depends on the supply of fish for food. 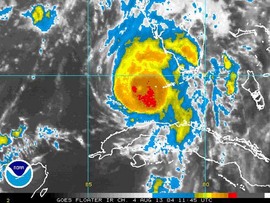 Infrared radiometers also help oceanographers study how much heat the ocean is absorbing from the Sun and how much it is reflecting away. This helps climatologists determine how much carbon dioxide is dissolved in the ocean, which is crucial for understanding climate change. Infrared measurements of the atmosphere are equally important, as this helps us track the amount of water vapor, which can strongly affect the warming or cooling of the atmosphere.

Climate change models need to be very precise, and these kinds of infrared measurements are crucial for providing data and testing the models.